Clips from a presentation delivered during the Alliance Leaders' panel at the 2012 Eve Online Fanfest run by CCP Games to promote Eve Online and Dust 514. The speaker, who heads an official player council organized by CCP (THE MITTANI), describes a campaign of harassment against another player and mocks the upset victim's response.

In a Q&A session following the main presentation, he gives the audience the victim's contact information and encourages them to "make him kill himself." 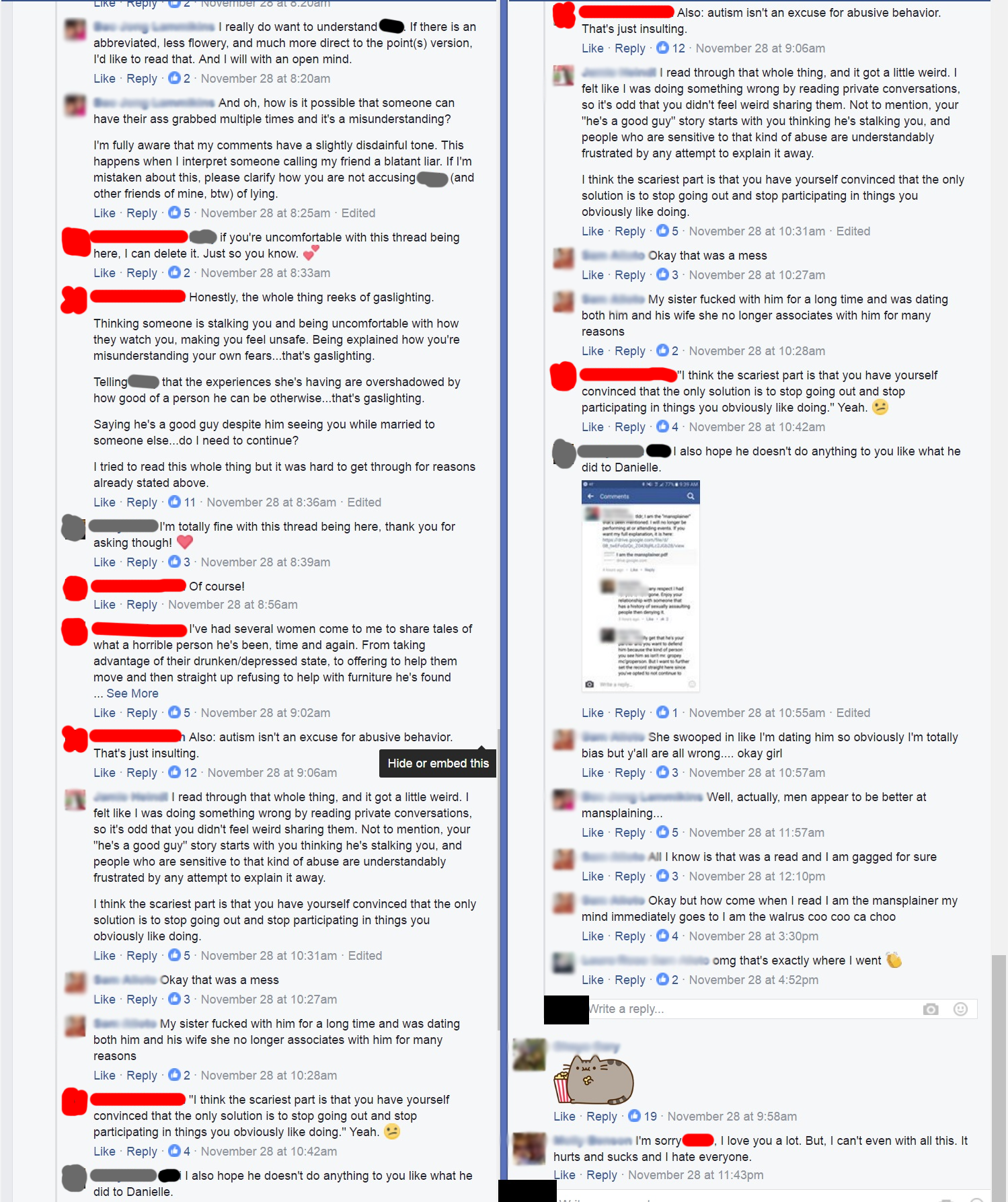 worked with him to release/spread this info back in 2008-9 but it was forgotten/falsely discredited: this is a real thing. i talked to him directly about it, we both agreed it needed to go public.

nobody else really cared. i left the community and gave up on it altogether, as did he. haven't kept in touch but that Twitter is definitely him and definitely real: Google the chatlog and there's more. Hey Guys, none of you know me, but I am one of the people in Delta Sqad that people tend to ask to get things done. I feel it's necessary to post our timeline of events to people so the facts of the situation can be judged fairly from our point of view and to help people process this last week's events. We are all in a place that nobody is happy about; it's like surveying your town after a hurricane blew through. I'm sure you have some pretty strong emotions about all this that you are still sorting through and it's important to take some time to grieve about that it's part of the healing process.

I would like to explain a bit how we got here so it can help people move forward.

On July 7th we had an incident on our discord server that involved kicking a person that at the time was just super annoying on discord. Later that night he was mouthing off to people in the fleet to the point where the FC kicked him, he later made a call-out thread in hell dump, saying we had Bully'd him out of the game, and told him to commit suicide, this is totally false everyone in fleet said no one wishes him any harm; they just wanted him to correct his behavior. At this time, after being berated and insulted by him, Mcwolf made a counter-call-out thread that showed how creepy he had been to her in PMs, I will spare you the details, but it was bad, really bad. This part is important. On July 7th this offender was kicked.

Late night, July 7th Cryo and I discussed this issue and more in PMs we both came to the conclusion that the org could do better to resolve these issues and we wanted to make a pitch for some structural changes to improve things. https://ibb.co/rHhbFHL https://ibb.co/dGTjDBn

July 8th, I spend the day writing the report cryo is going to present to ilum. I talk with a bunch of people from inside and outside the imperium and I feel vindicated in my belief that changes need to be made. I personally asked MCwolf and Daniel Onzo to write sort of harassment impact statements as a preamble to the report to hammer home why on an emotional level why changes need to be made I will include the second to the last draft of the report I wrote with the names redacted because some of the perpetrators have a delicate mental state and I would not like to see them being victims of harassment. https://privatebin.net/?7a3370b98ff4dd3c#BB4d8XvVHz99P2PrfwDaormMKcQBXLffDMUYfC8FA15j

July 9, Saturday morning the last 18 hours of the imperium as we knew it. A mid-day cryo messages me saying he presented our report to ilum and it was received well.

July 9, 6 pm, we are informed that MC Wolf was kicked and black-listed from the imperium. I am personally livid that I spent 24 writing a report on harassment only for them to kick one of the people testifying in the report. My last two sentences to the higher-ups are "If you shake this tree, you will not be able to control what falls out" and "By doing this you are going to start a nuclear meltdown is that is going to chain-react uncontrollably"

July 9th FNLN goes nuclear he holds 680 billion of member isk hostage. Delta comes to terms with the fact that we are going to get airlocked people, hop on discord coms to ask what's going on and we just sing closing time at them. https://www.youtube.com/watch?v=xGytDsqkQY8&ab_channel=SemisonicVEVO

On July 10th FNLN posts his chat logs with the Mittani. I will say this is the first time anyone in Delta other than FNLN has seen these. Things have now gone from us throwing a Molotov at city hall to a righteous crusade; the Rubicon has been crossed; there is no going back from this point, it's ride and die from us from here on out. https://forums.somethingawful.com/showthread.php?noseen=0&threadid=4006027&pagenumber=31&perpage=40#post524772360

July 11th Aldani goes on New Eden post to make her accusations public. Side note this takes an extraordinary amount of courage. https://www.twitch.tv/videos/1530144832?t=0h46m17s

July 13th A director disgusted by Mittani's behavior in the above Facebook post gives us Saturday illum logs https://forums.somethingawful.com/showthread.php?threadid=4006027&userid=0&perpage=40&pagenumber=62#post524820978

July 15th the Mittani steps down.

So there you have it, folks, that is the most official and correct timeline of events I can give you, what happens from here is up to all of us to choose a better path moving forward. I will also say I have spent nearly a week getting a crash course in the long-term fallout of harassment and abuse online and it sucks please don't do it and finally never suffer in silence talk to people let your feelings be known and don't let someone diminish you.

This is MSN messenger for the younger people reading this - these all took place within the late 2000s. All were sourced from Hezzy, except the next picture.

For context, the initial allegation was that Hezzy had banned Xenuria for posting child pornography on the Facepunch forums, specifically the "OIFY" which was a forum for pornography and spam.

In this picture, Xenuria's main complaint is that the image he posted wasn't child pornography, but rather simply child nudity. He would use this logic to accuse Hezzy of paedophilia. 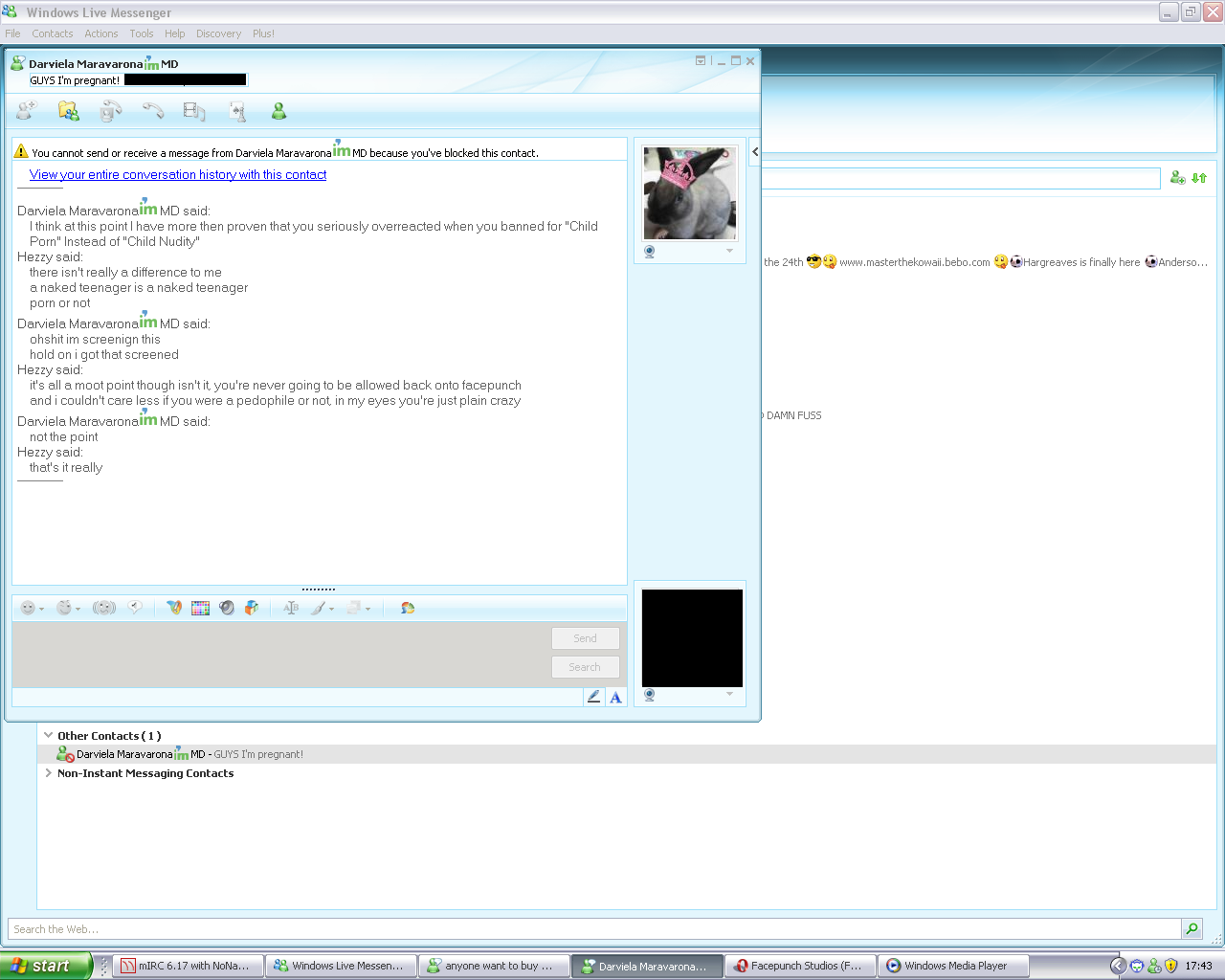 [DISCOVERED AFTER RECORDING] A log sourced by a third party from an archive of Encyclopedia Dramatica. This log shares the same email address as Xenuria but the authenticity cannot be verified.

"Bunny" is the person referred to as "T-Minus" in the recording. Xenuria appears to be attempting to groom T-Minus and convince him to "go on cam and pose nude". 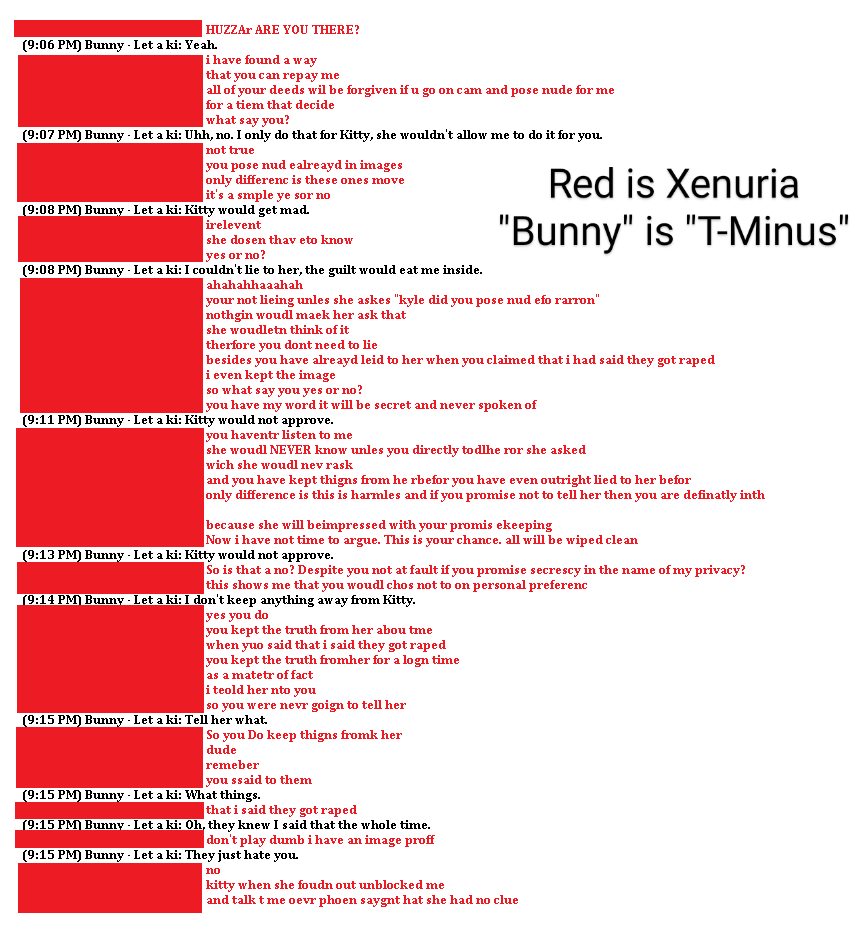 This is a group conversation, with Xenuria writing in red. He admits drawing pictures of little girls naked and attempts to justify it. 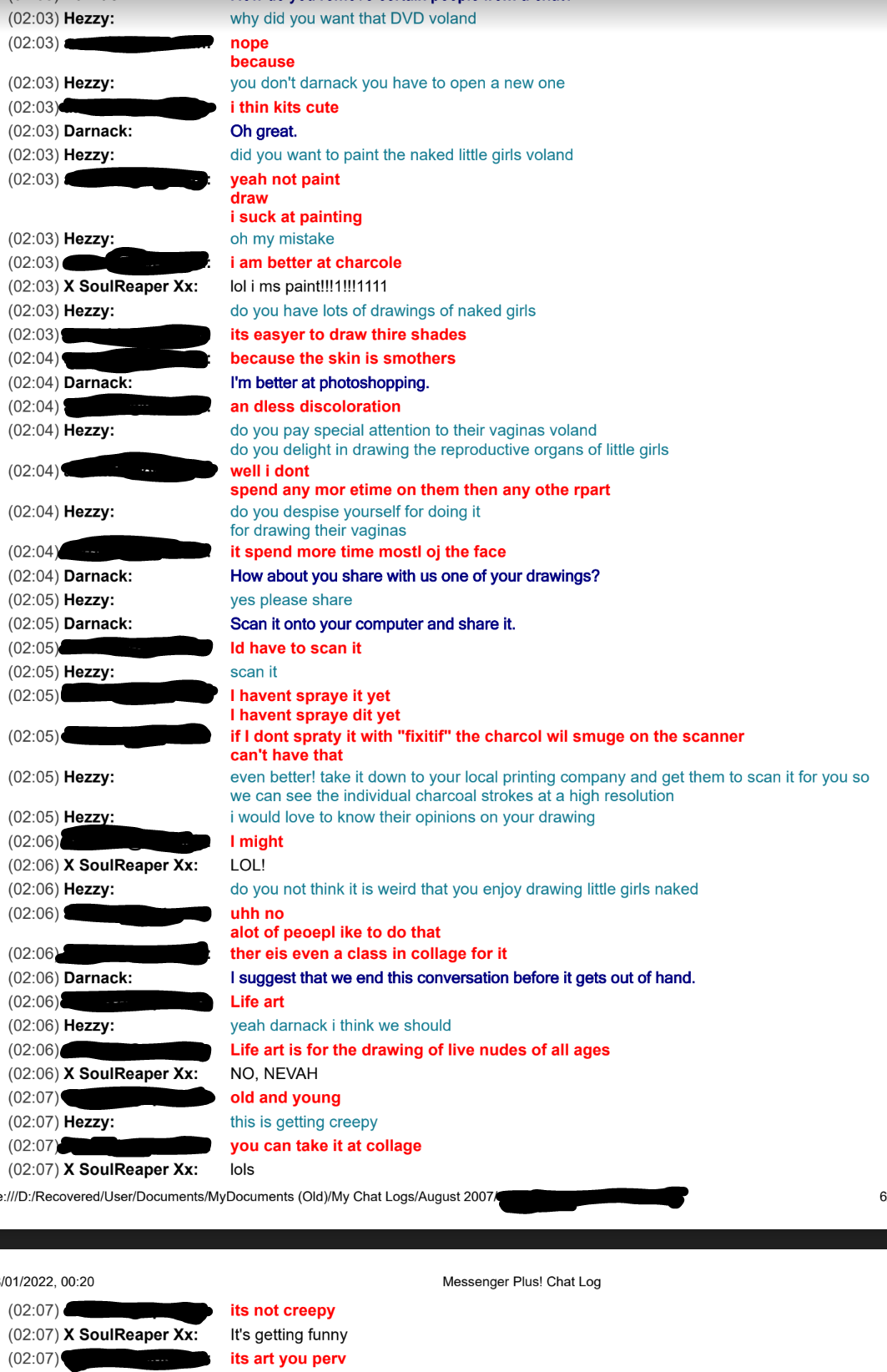 Xenuria was accused by Hezzy of engaging in prolonged brute force attempts against both his and Garry Newman's accounts (founder of Facepunch Studios, creator of garry's mod and Rust). This was after he was banned.

This is a chat log between Hezzy and another person, where this person points out that Xenuria was accusing Hezzy of paedophilia. This is the only detailed description of the image that Xenuria posted that prompted his ban - under UK law this would be classified as a "Category B child abuse image".

The images were posted on the Facepunch forums under the subforum called OIFY - which is a forum dedicated to pornography and spam.

The image was since deleted from the website and is not recoverable. A report was made to the FBI at the time. 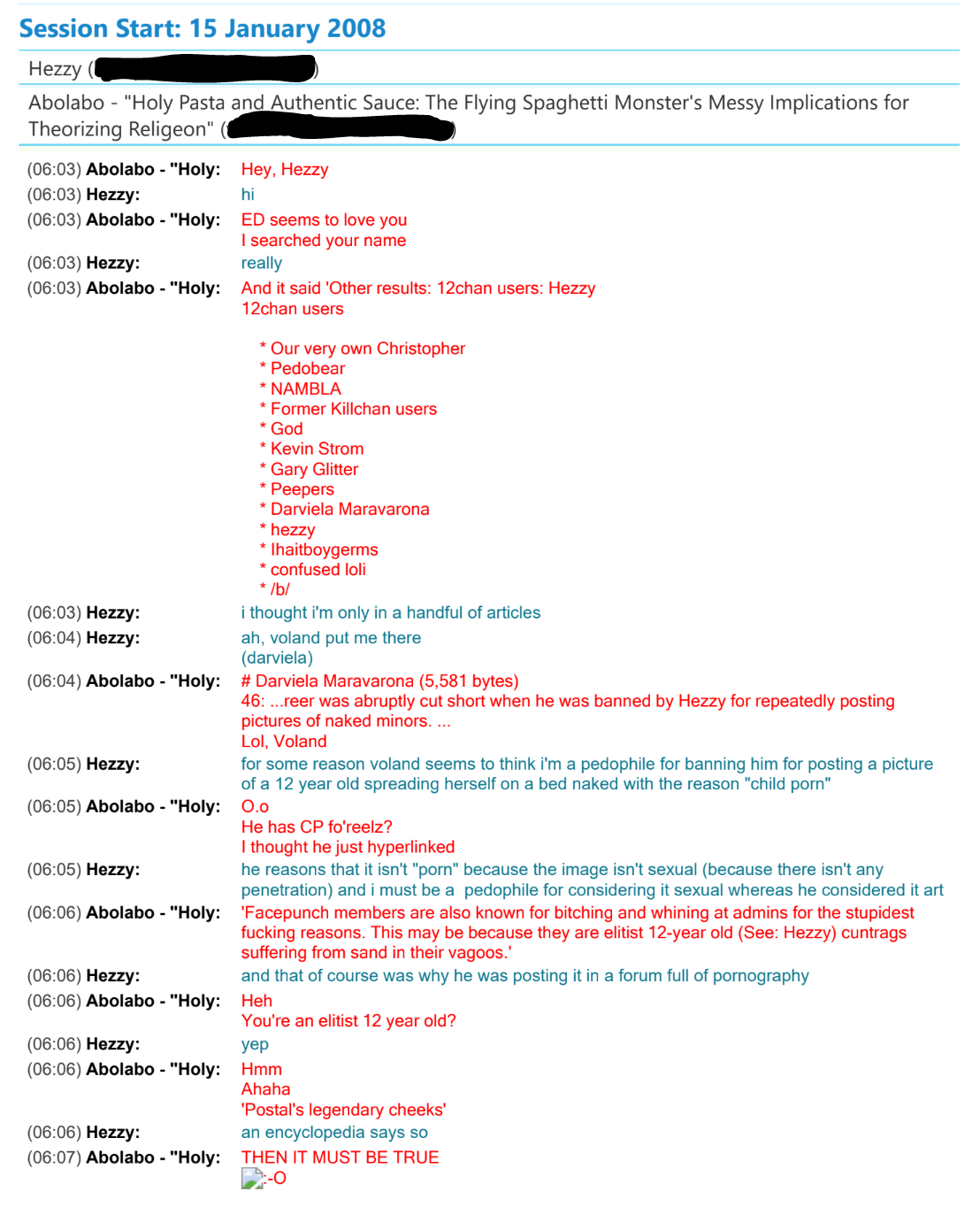 A conversation between Hezzy and another Facepunch moderator. This also shows how many accounts that Xenuria had registered on the forums to bypass and evade his bans. He would continue to post nudism images depicting underage girls on the beach and was repeatedly banned.

An example of a subsequent post that Xenuria was banned for. The link that is redacted is for a child nudism website, which is also mentioned later in a chat log.

"Pink Nipples" were the only forum ratings in this certain subforum.

A conversation between Hezzy and another Facepunch moderator 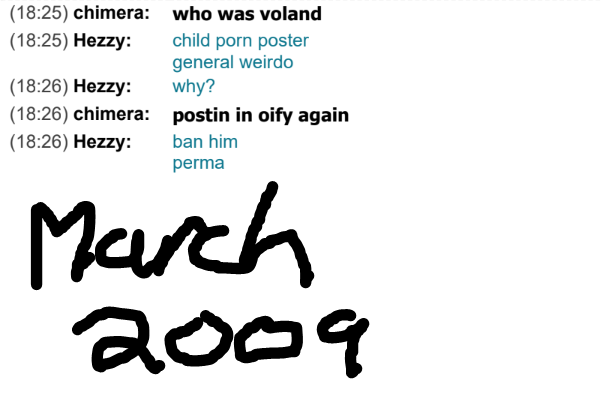 A conversation between Hezzy and another Facepunch moderator. This also shows how many accounts that Xenuria had registered on the forums to bypass and evade his bans. He would continue to post nudism images depicting underage girls on the beach and was repeatedly banned. 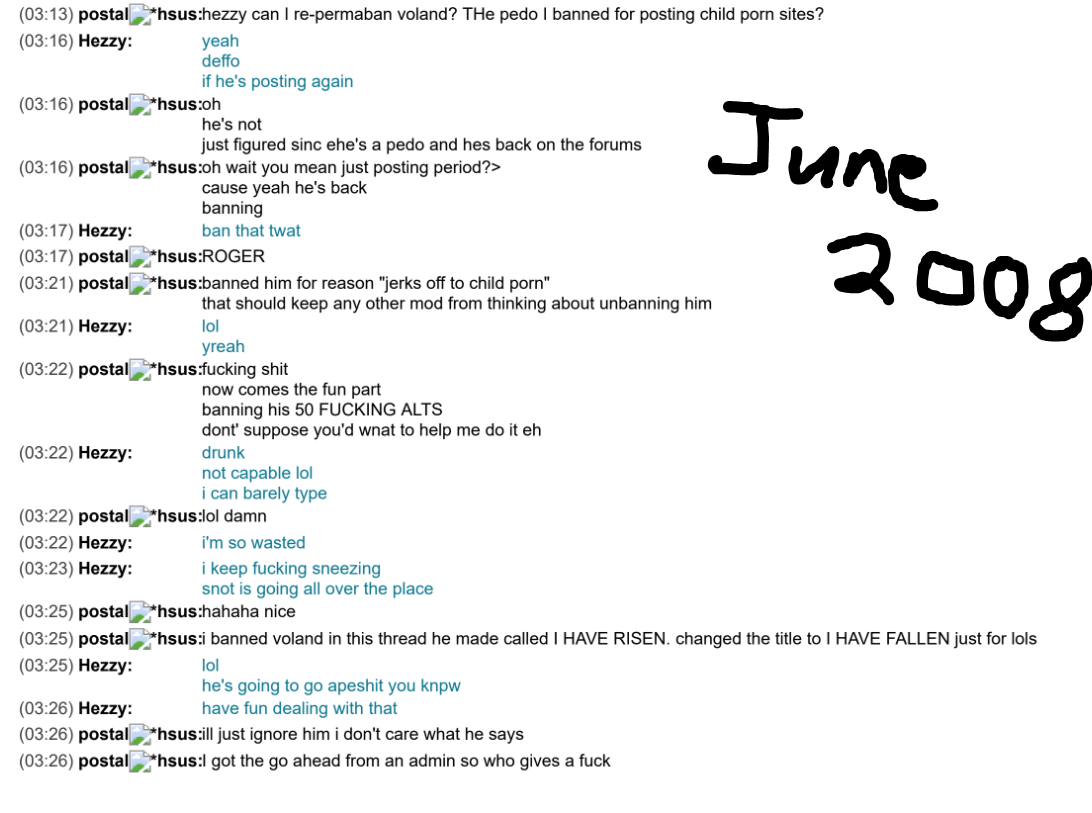 Hezzy was added to this group chat. "Katy / Kitty / Kelbie" and "T-Minus" are both in this chat room and do not corroborate the accusations levelled by Xenuria towards Hezzy. 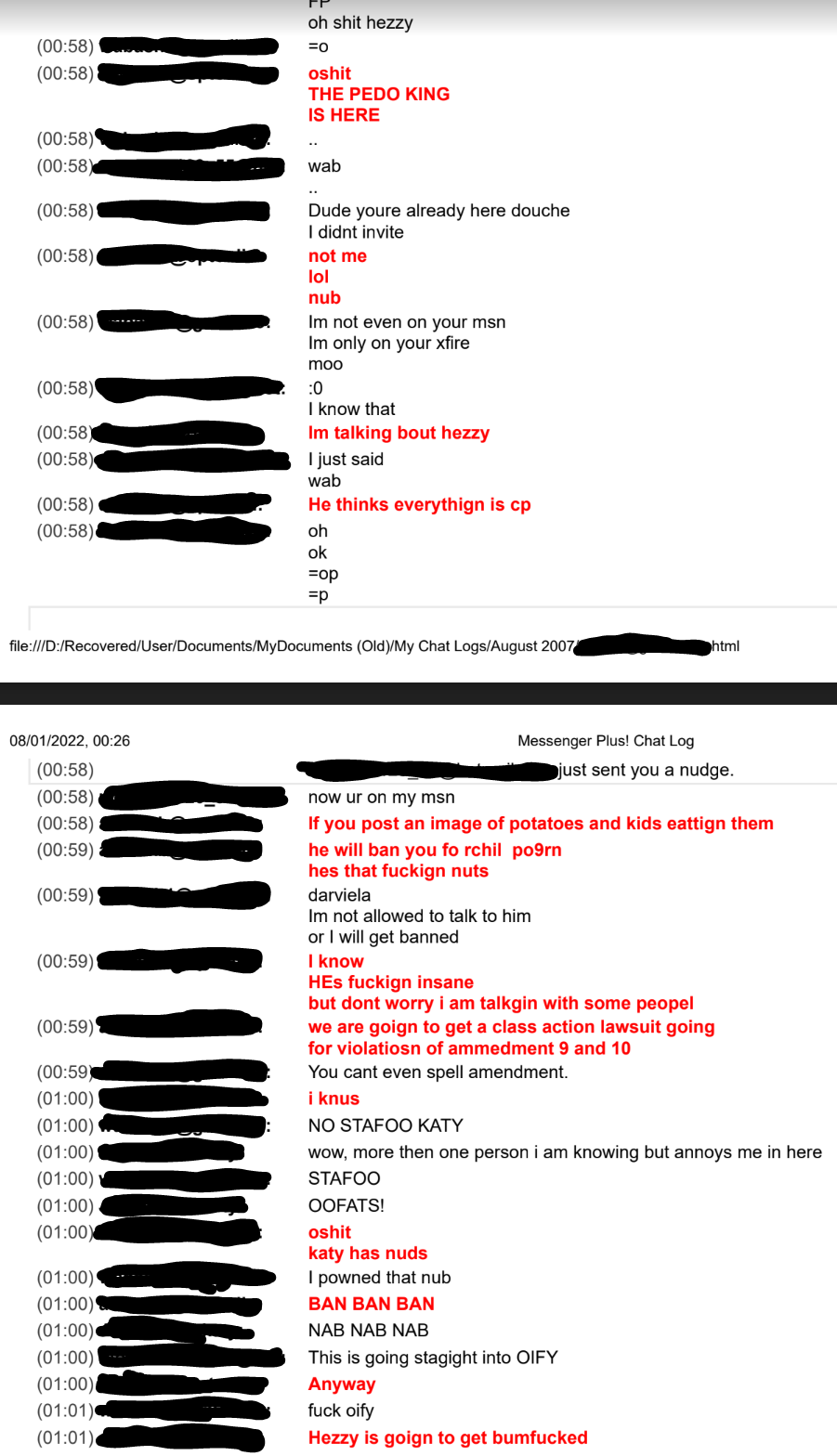 An email exchange between Hezzy and Xenuria about an unrelated ban prior to the child pornography incident, which links Xenuria's email address in the chat logs to his Voland account on Facepunch. 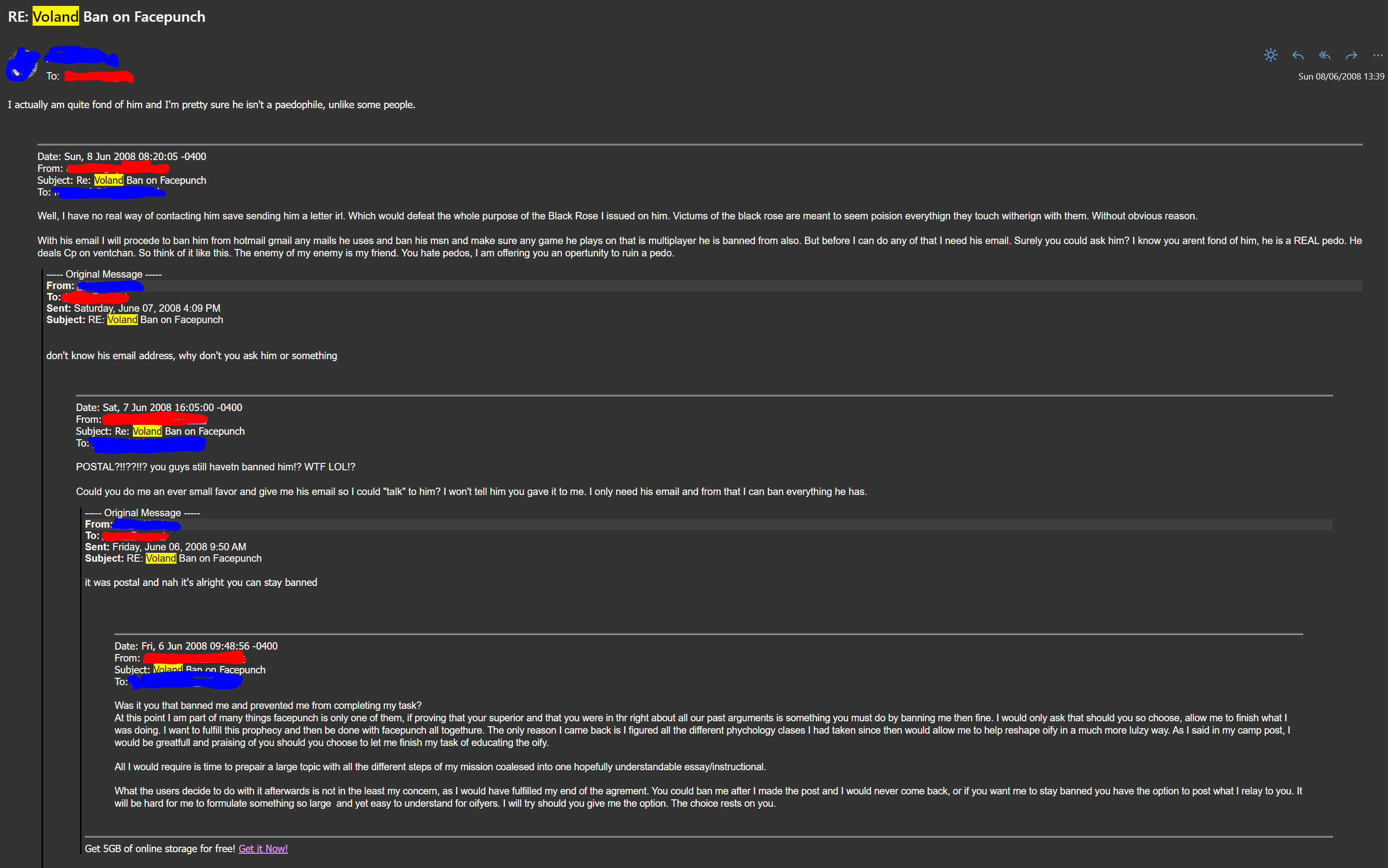 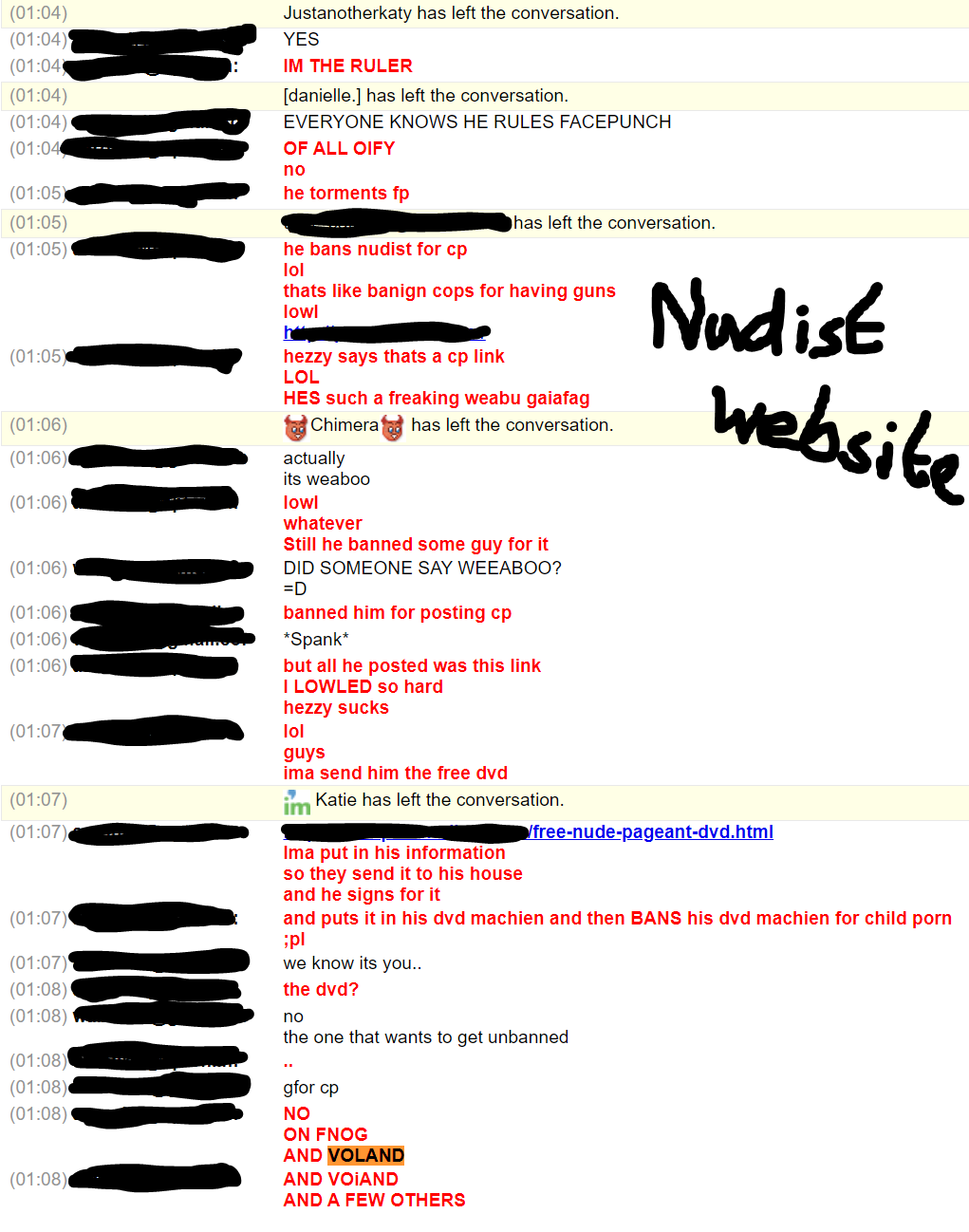 The TEST blacklist entry for Xenuria. He admitted on comms to "infiltrating" paedophile groups as part of a special law enforcement taskforce. He gave advice on others on how to source child pornography.

Xenuria asked the moderators of Cesspool to unban him, in order for him to confront Hezzy. They exchanged a few messages via text, as seen here;

Hezzy was invited into the voice channel and it was decided that the person with the most downvotes would be permabanned from the Cesspool.